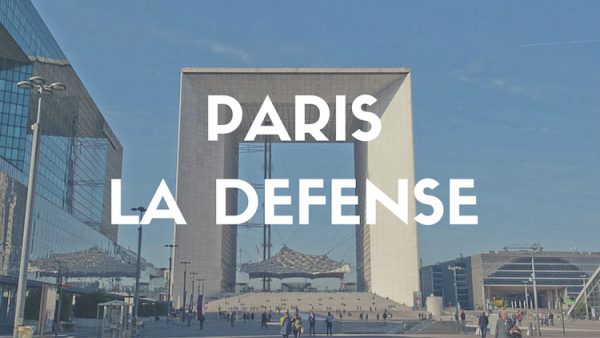 Home to the Largest Open-Air Contemporary Art Space in France

As soon as we stepped out of the metro into the bright sunlight La Grande Arche was rising in front of us. With measurements of 110 meters in height, width and depth La Grande Arch is the landmark of La Defense, Paris’ business district.

Via the Champs-Elysées the structure connects with one of Paris’ other landmarks, the Arc de Triomphe, in one straight line. By coincidence this was pretty well visible on the day when we spend some time outside the hustle and bustle of the city centre. 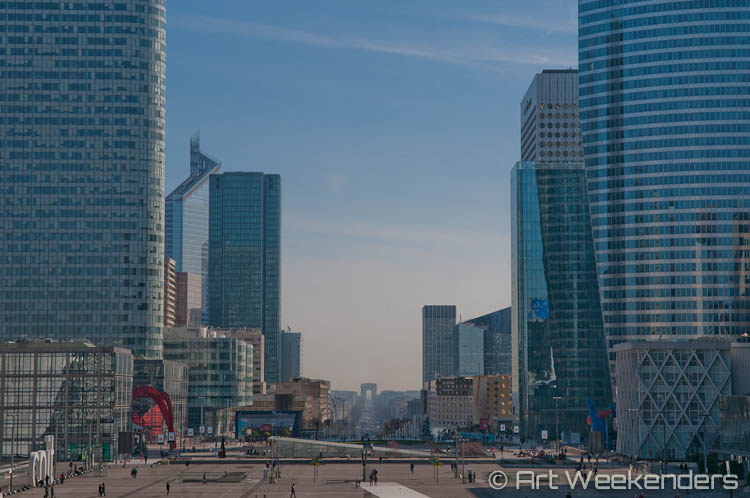 The view from La Grande Arche toward the Arc de Triomphe

The main draw for us to visit La Defense this time around in the French capital was actually the art route running through it. We were alerted to this by the artist Guillaume Bottazzi, of whom an artwork was revealed here a bit earlier this year. His work is the 7oth addition to what is claimed to be the largest open-air contemporary art space in France. 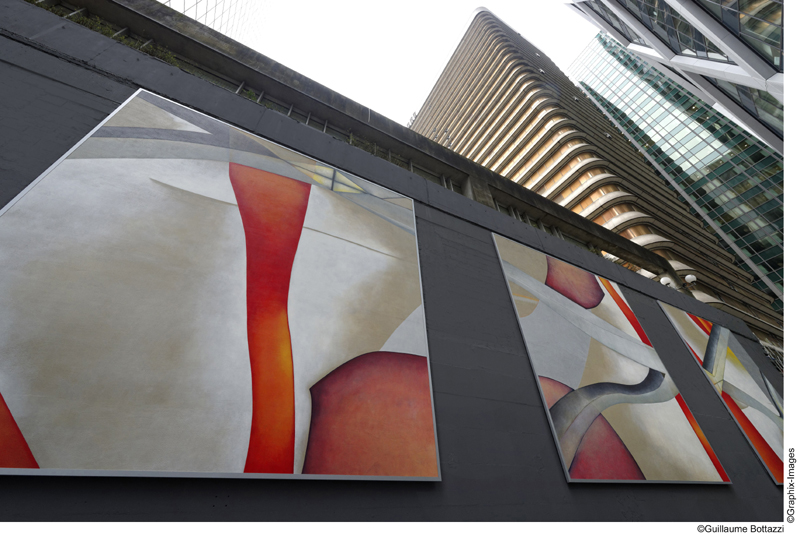 The art route now consists of 70 – mostly – contemporary art works and includes works of world-famous artists like Calder and Miró. The route runs through the whole area encompassing some 5.6 million square meters.

The ambitious project was initiated already in 1958 – at the commencement of the modernization of the La Defense area, where previously factories, shanties and, yes, even some farms were situated – and is meant to expand even further.

Where you will find some of the art works on La Defense’s main square, others are somewhat more hidden in between the skyscrapers. A good trigger to explore areas off the regular track as well. 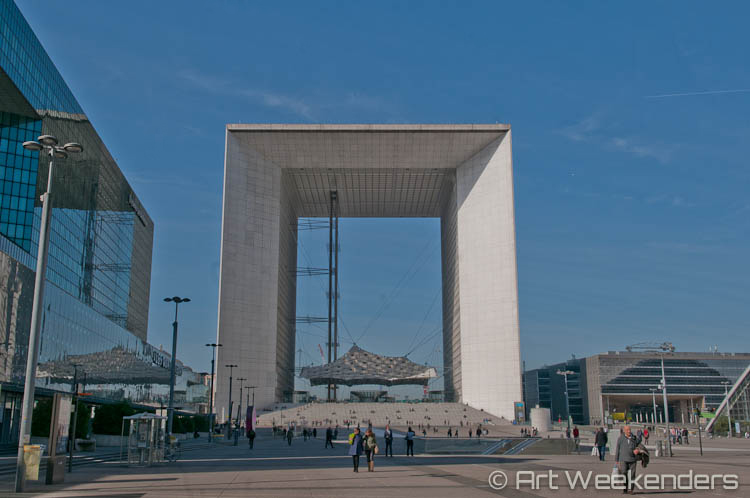 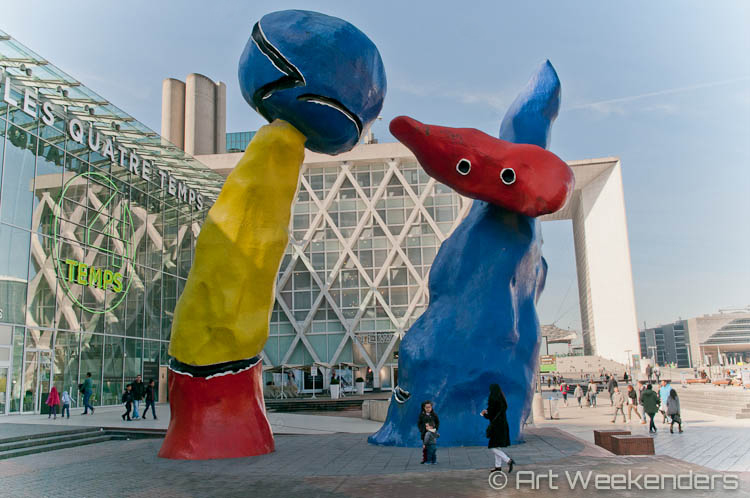 During our visit to the area we found it quite remarkable to see that only few other tourists followed this art route. Most of them seem to run up to La Grande Arche to immediately head back to the centre. A missed chance we would say, since this is really an enjoyable outing on a bright, sunny day. 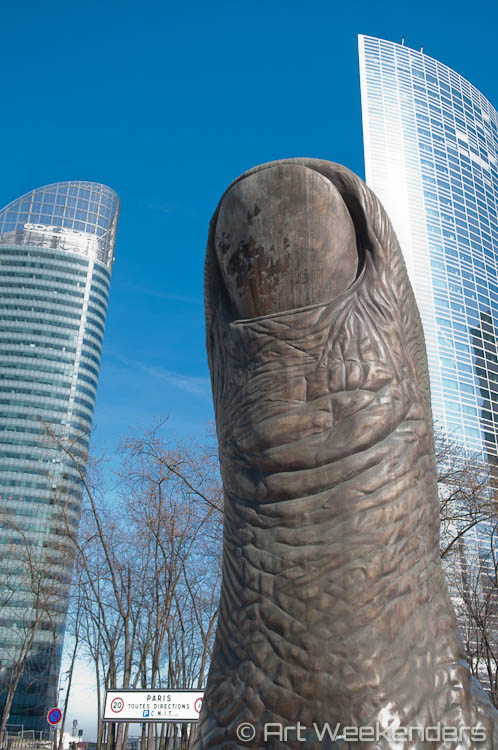 Whereas La Defense mainly functions as a business district – more specifically Europe’s premier one, serving over 3,500 companies and an estimated 150,000 workers – there’s more to the area. In the heart of Paris’ business world you can also find a large shopping mall and different restaurants and other venues to entertain yourself. Apart from that, there are also some 25,000 people living permanently in the residential part of this well-known district. So even if you come here during a weekend in wintertime, you will still have plenty options to relax and see people around. 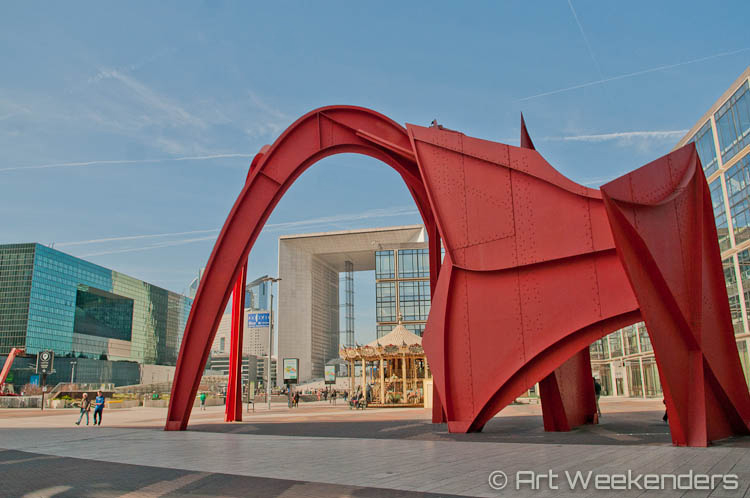 The reflection of the Coeur Defense in La Defense, Paris

If you don’t want to miss any object or especially not the one of your favorite artist, we recommend you to pick up the art map. This is available at the Info Defense booth at the square. You can also download it in advance from the La Defense website. On this website you can also find information about guided tours and the art works themselves. 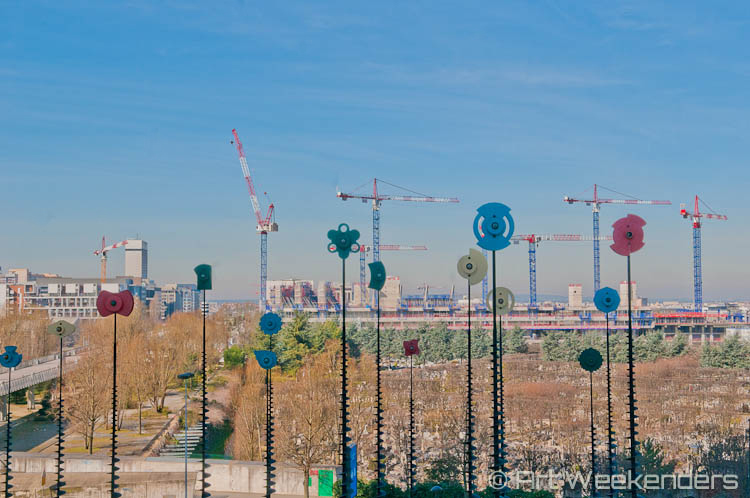 Serving that many people it is hardly surprising that there are multiple ways to get to La Defense. You can take either the tram, the metro, the bus or the train. Here’s an overview of the options. The area is also relatively close to the Bois du Boulogne. Here the new Louis Vuitton museum for contemporary art is located. So if you happen to be in this part of town, why not combine the two! 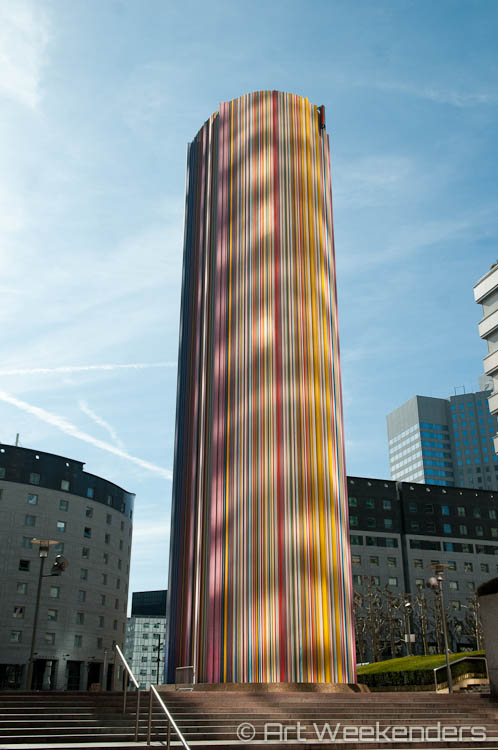 Looking for more information on Paris? These are some of the other articles we wrote following our visit:

The Year’s Best Exhibitions in Paris

15 Tips To Get More Out Of Your Paris Museum Visits

Is The Paris Museum Pass Worth Your Money?