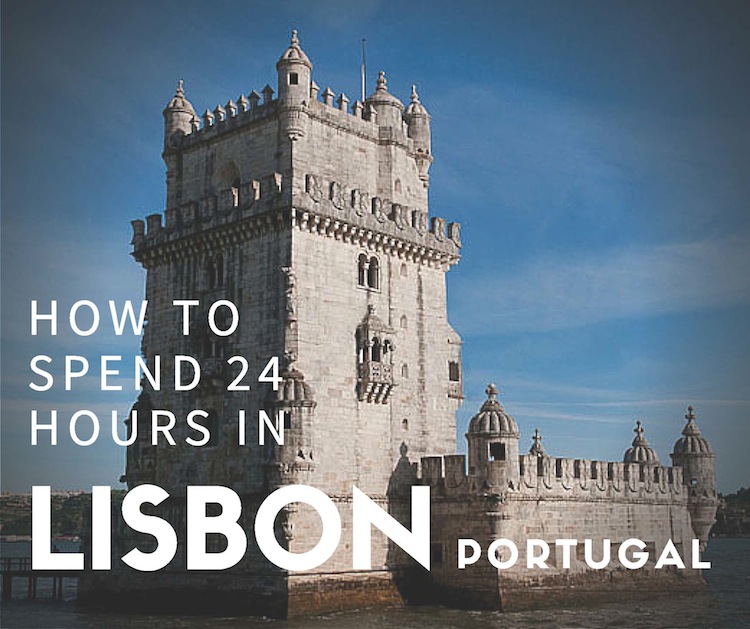 How To Spend Half A Day in Lisbon

It happened a few times now. Actually it happens almost upon every trip we take. Arriving to a new place – country, city, you name it – and we come to one and the same conclusion over and over again: “you know, it would be really fun to live here”. We are suckers for the new. It is just simple like that. Since we have been active with Art Weekenders, it only accentuated. This is  possibly also because we travel with different kind of eyes. Having our site to care for I can safely say that we care more for the places we visit too.

No exception with Lisbon. Neither of us have been in the Portuguese capital for some 15 years. While we only had half a day in Lisbon to reacquaint ourselves with it now, we felt almost wanting to skip all other plans and stay. Lisbon is great, Lisbon is intriguing and, yes, of course we could live here too… We will in any case surely be back soon enough in Portugal. There is a lot on our list to get better acquainted to. Until then we would like to already share some snapshots from this city on the seven hills with a rich history to look back upon.

I think it is fair to say that it takes some time to figure Lisbon out. I remember thinking that the first times visiting it. This time around it felt true again. Be it its geography, the transport system or the national psyche, there are some complexities on offer here. I think that is also the reason that people are not always feeling immediately convinced about it. This observation always surprised me. 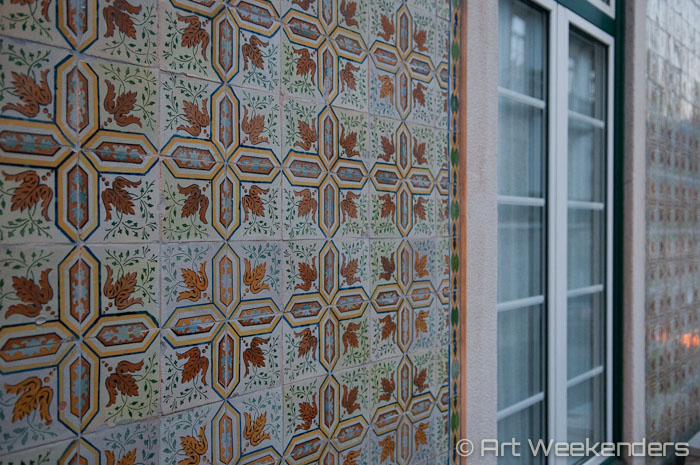 A tiled wall in Alfama, Lisbon.

For the ones who would like to simplify it, the parallels to the melancholic ‘fado’ quickly springs to the mind. It is true, people are fairly reserved, almost introverted. It is an observation I often made about the Portuguese who I knew privately or through work. They are often subdued. They are way more quiet than most other people you meet. Once they get your attention though, the Portuguese tend to be super-friendly.

Lisbon in Two Areas: from Belém to Alfama

With this in mind, let us venture out for our half a day in Lisbon. Of course, a few hours are never enough. I think that even a month wouldn’t feel adequate to explore Lisbon and its immediate surroundings. You would still be surprised though how much you can fit into an afternoon.

For the sake of simplifications: there are two concentrated areas that covers a good chunk of the highlights. The historic centre with the hilly Alfama district around the São Jorge Castle is the main one. The other one is the riverfront suburb of Belém, with its 500 years old famous tower and its museum-district. 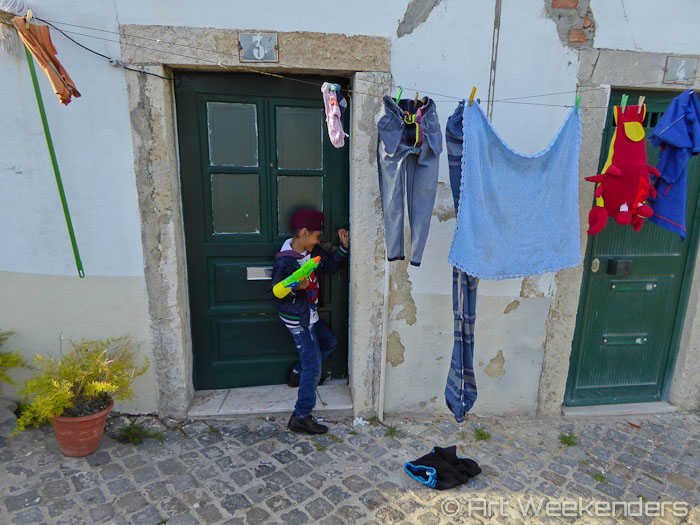 If you would like to combine the two in one afternoon, just like we did, our recommendation is to venture straight out to Belém. If you have a hotel stay in your plans, quite likely you will be located downtown or in the more business-like but fairly dull area around Avenida Da Libertade around Entrecampos/Campo Grande. Whatever is the case, your best choice to reach Belém is by taking a bus (line 727 is a good one). It is about half an hour to get out from the centre. In this way we found we immediately got a good feel for what the city is about.

From the comfort of the bus you will see the modern replacing the old, the old staying old. You will see the signs of time and the winds of change. Most importantly, it will give you some varied snapshots of what Lisbon is about. On the way down, if you are around Marques de Pombal on Avenida da Libertade pay attention to the left (or have a stop if you are still early on in the day). There are some fantastic street art murals (aka the Crono Project) to check out here. They are truly world-class and with an added value to the cityscape. 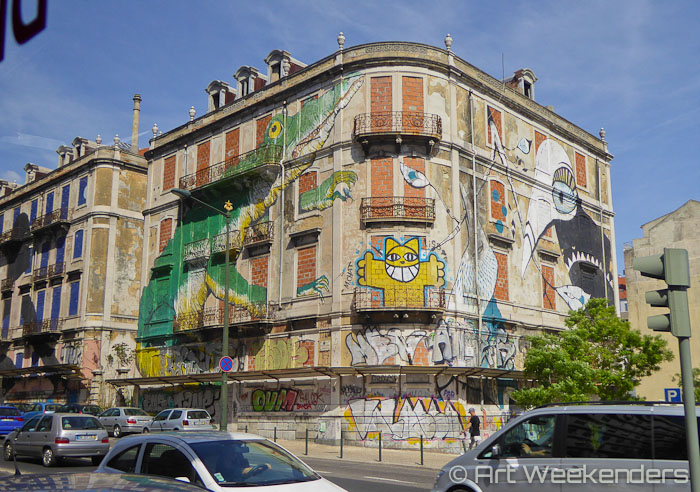 Out in Belém jump out at the Monasteiro de Jeronimos. This is one of the oldest structures in town and one of the two UNESCO World Heritage sites of the city. This old monastery from the 15th century is a dominant structure in Belém with extravagant façades and a rich history. These days it houses a museum.

If you would like to test one of the local Portuguese culinary highlights, the pasteis de Belém – a pastry filled with caramel that is heavenly and originates from the store with often way-too-long lines – is situated just steps from the Monasteiro. Of course we tried them too. 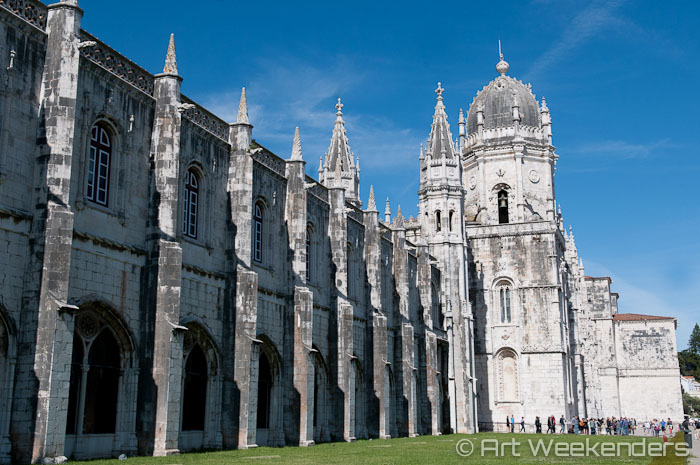 This part of Belém is a cultural hub of the capital with several museums. For the art lover in you, we would strongly recommend to visit the modern art museum of the city.

The Museu Coleção de Bernardo, located in the Belém Cultural Centre (CCB), is actually world-class. Be it on a hot summer day when the shelter of the museum will cool you down or just your interest, just go. The collection of 20th century art is rich, well-curated and highly satisfying. 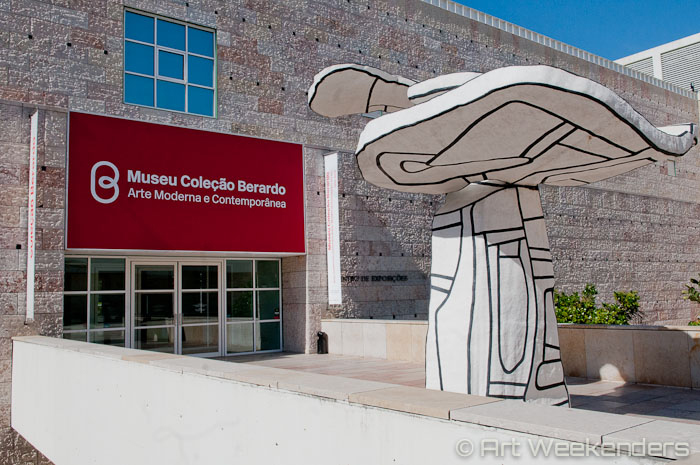 Once done you can just as well head down to the riverfront. Here the second World Heritage site of the city is located: the Tower of Belém. Celebrating 500 years of existence in 2019, this beloved symbol of the city is a nice spot for picturesque moments, a glimpse of the Atlantic and some reflections about the maritime history of this country and a fresh sea-breeze in your face. 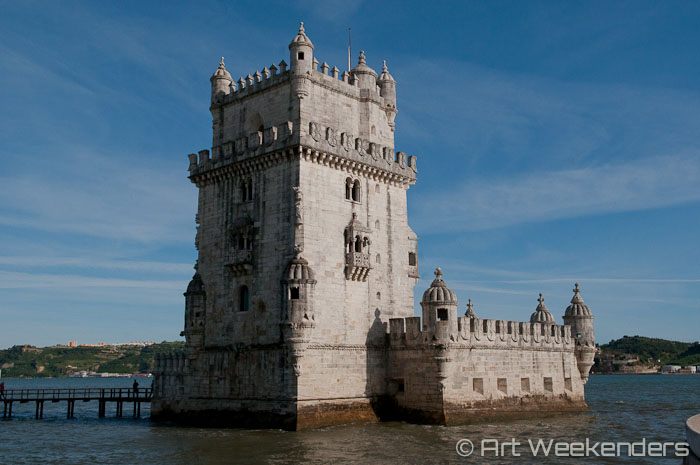 We still had enough time to stroll back along the river Tejo. Here on the way back the sister-bridge of San Francisco’s Golden Gate was taking up our view, with the Christ statue (built in the 1930’s, very similar to the one serving as the symbol of Rio de Janeiro) on the other side of the river. The April 25th Bridge is a modern symbol of the city, where modern architecture takes an ever bigger role in general. 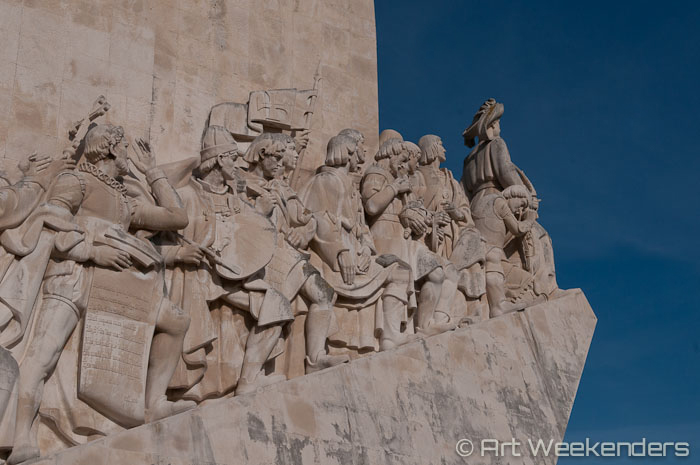 Along our walk we also came across a modern symbol of the city, the statue for the memory of the sailor and the discoverer of the sea route to India, Vasco Da Gama, who departed from this very spot, now more then 500 years ago.

While it took us a bit of a longer walk, soon before the bridge there’s an art gallery worth visiting. This was in fact what was the main goal of our trip to Belém this time around. During the spring and summer of 2015 the exhibition ‘Genèsis‘ by Sebastião Salgado was hosted here, which we find a momentous and beautiful tribute to our planet by the award winning photography giant.

After Belém it was high time to head back to the past and find our way into the steep hills of the old town. If you would like to do this in style, we highly recommend you to find the departure point of the historic 28E tram. Via this historic mean of transportation, an inheritance already from the end of the 19th century, you will have a unique chance to see the curling picturesque streets of Chiasco, the Baixa and eventually Alfama. 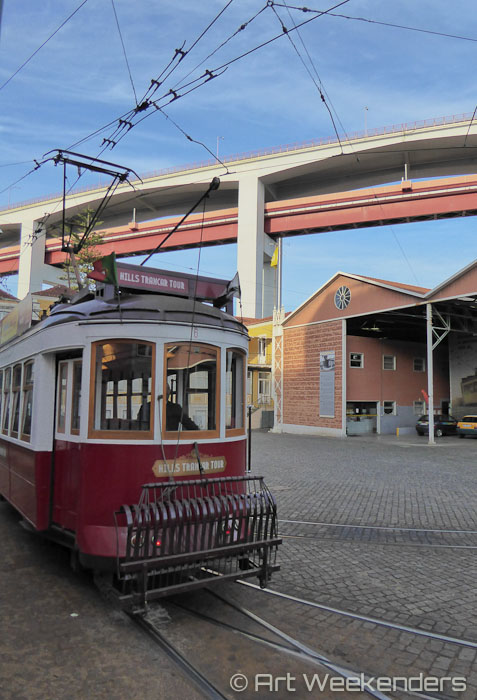 Alfama is the historic quarter that best preserved the atmosphere of the past. This is largely because it was spared by the devastating earthquake that demolished a huge part of the city in 1755. Alfama is there to be lost in. This is the neighbourhood where the Moorish, Muslim community lived after the Christian conquest of Lisbon and architecture-wise not that much changed since. We found some splendid views around. Even if you come here, like we did, around sunset you will have many reasons to count yourself lucky. The São Jorge Castle is open until 9 pm in summertime, so for the best view in town make sure to have enough time to climb the final bit to the fortified walls and the inner castle area. 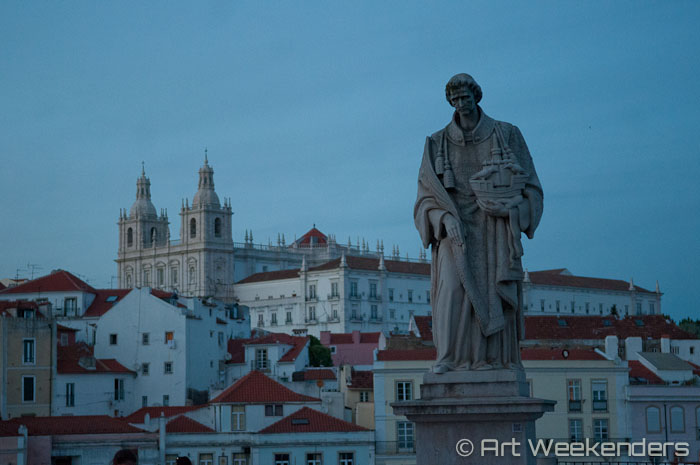 A view over Lisbon from Alfama

We didn’t, the lure from the restaurants and the sound of our stomachs started to distract us. Alfama is the home for many of the fado restaurants of the city. While we won’t say for sure, but it felt like many are mainly catered for the tourists. So if you would like to choose the right spot, we recommend you to do your research. We opted for a place called Le Petit Café, and we can say at once, we were not disappointed at all. In fact, we found it highly enjoyable, with friendly service, excellent food, tasty wines, cosy atmosphere and good prices. 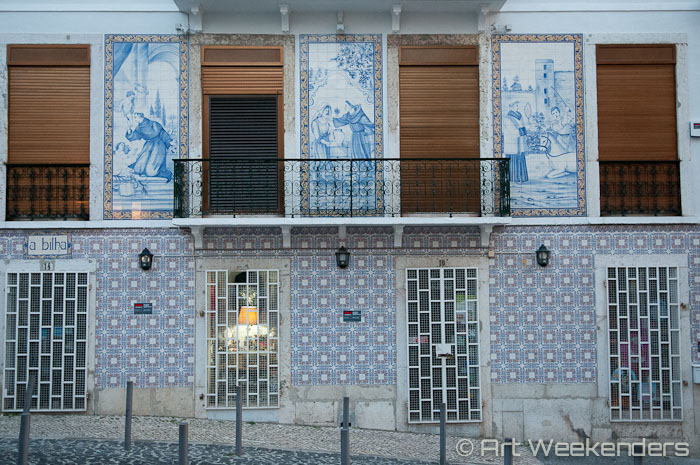 Tiled houses in the Alfama district of Lisbon, Portugal

To finish off our half a day in Lisbon, the final walk down towards the Praça de la Constitucion easily took us past the Catedral de Sé and gave us a nice chance to admire the narrow streets of Alfama illuminated. Not a bad way to round off half a day in Lisbon with, really. 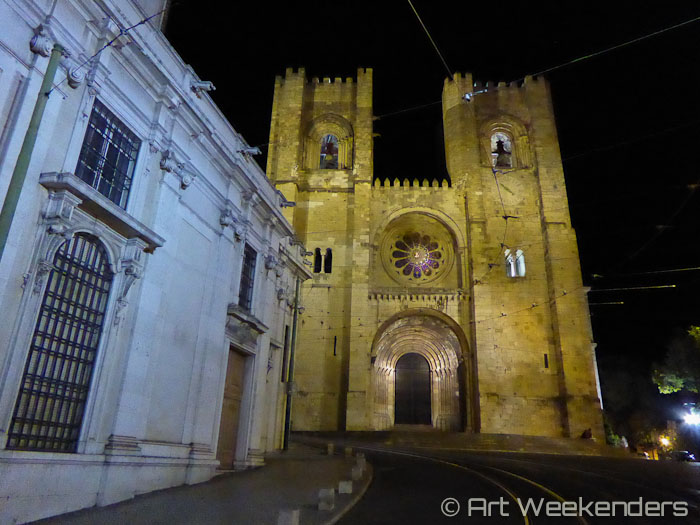 Our reacquainting with Lisbon was greatly enjoyable. Now we know for sure that we will soon be back. If we gave you the idea now to book a trip over there, we are confident that you will find it a good choice too. 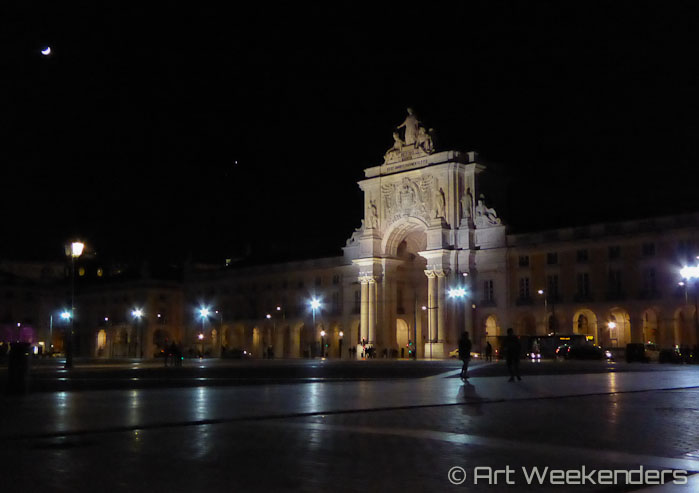 Praca de Constitucion by during half a day in Lisbon-Portugal